Crochet Stitches that are taller than treble crochet aren’t used as often, but they don’t have to be intimidating and are pretty easy to learn.

Today I’m going to talk to you about some pretty tall crochet stitches. Although they aren’t quite as common as the shorter, more basic crochet stitches, they are still quite useful.

Some stitches can be tall and work up quickly due to a bulky yarn or larger hook size. However, the stitches we are going to look at here(the double, triple, and quadruple treble stitches) are simply much taller than other stitches anytime if done in the same yarn.

Love having a starting point for your creativity? Grab my master list of ideas for FREE: 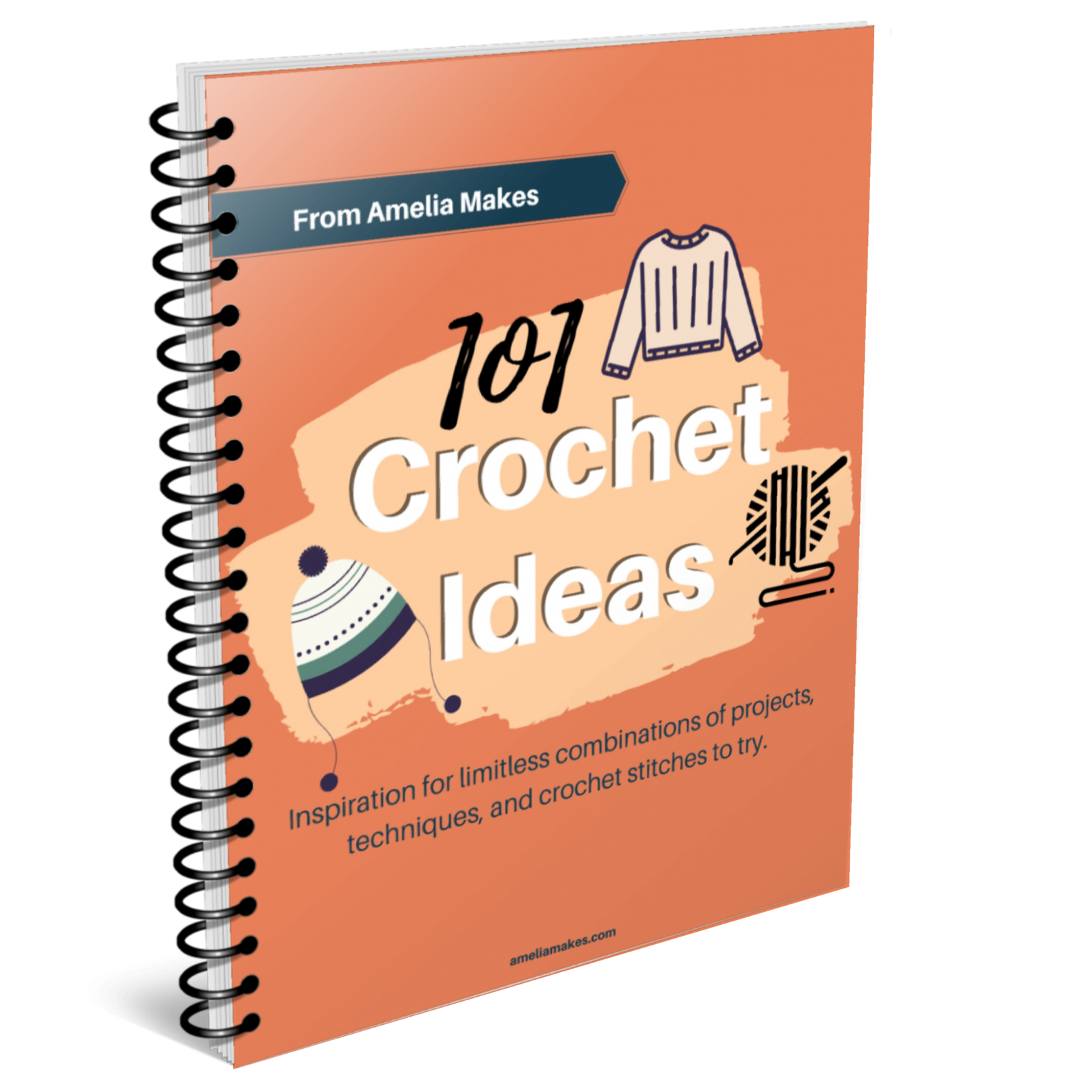 These tall stitches can be used to add visual interest to a crochet project. They are so tall that they can easily create a lacy, open effect. These large stitches can also be useful if you want to create something that works up quickly. Although each stitch takes a little longer, row by row you make a lot of progress.

And finally, these stitches are useful because patterns do use them, just perhaps not the patterns you use first when learning crochet. More complicated designs tend to use these stitches more, in my experience. An example might be when one round of a mandala reaches down over top one or more other rounds in a different color.

If you want to see a great example of a crochet blanket that uses these huge stitches, check out this free stained glass blanket pattern from Arctic Crochet. Some tall crochet stitches are used in that pattern where you see black “posts” extending down over the colorful sections. I have actually made a blanket from this pattern and it’s marvelous.

You can also see my own pattern for a flower that uses very tall stitches. This dogwood flower uses quadruple treble crochet stitches, and goes really quickly because of it!

If you’d like to go straight to a summary of how to work each of these stitches, you can scroll to the end of the post right away. There you’ll find a handy video there that I made to show all three of the taller stitches worked up.

To get started, let’s look at the treble stitch.

Characteristics of the treble

The treble stitch (which is abbreviated as simply tr) is what I consider to be the tallest of the more common stitches. It’s about as tall as three chain stitches, and is used in a variety of projects. Generally it works up quickly without being too open.

How to crochet the treble(link this to your post)

To make treble crochet stitch, you start by yarning over twice. The hook is then inserted into the chain or the right stitch in the previous row, and a loop of yarn is drawn through. After that, we yarn over again and draw our yarn over through the next two loops on our hook.

At that point, there should be three loops of yarn left. We repeat our process of yarn over once, drawing through the next two loops two times more, until there is only one loop left.

If you’d like to see the treble stitch done in more detail, you can see my whole post on the treble crochet stitch here.

Characteristics of the double treble

But, beyond the treble stitch we get to those tall stitches that are less commonly known and used. The double treble stitch(I know, I always think it sounds more like “double trouble”) is the next stitch higher. It is as tall as four chain stitches, and involves one more step.

How to crochet the double treble

The steps to crochet the double treble start with yarning over three times. Then, we insert the hook and draw yarn through the same as we do with a treble stitch(that part remains the same for all of these. After that, we yarn over again and start that pattern of getting rid of two loops of yarn at a time, yarning over in-between each time. We do that four times total(one more than last time) until only one loop of yarn is left.

You will probably start to see this pattern on your own, but I will say it here: each stitch is the same with what you are actually doing, except that the taller crochet stitches require you to do certain things more.

Each stitch “upward” increases in two areas when it comes to the directions: First, you yarn over more. Second, you will have to draw your yarn through two loops more times after inserting the hook and drawing up your first loop of yarn.

Hopefully that makes sense. Even if it’s not totally clear yet, you will probably get more clarity as you practice and hopefully watch the video. This is one thing that seeing someone do will be really helpful for

Characteristics of the triple treble

Since I’ve pointed out the similarities in these tall stitches, you may be able to guess the last two already. The triple treble stitch is as tall as five chain stitches(we’re getting pretty tall now!). At this point the work will seem very lacy and open.

How to crochet the triple treble

To start a triple treble stitch, yarn over four times. Insert the hook in the correct spot and draw a loop of yarn through and up. Yarn over again. Draw that yarn over through the next two loops of yarn on your hook. Finally, repeat that pattern of *yarn over once, draw through two loops* four more times(five times total)

Are you hanging in there with me so far? We’ve just got one stitch left!

Characteristics of the quadruple treble

Finally, we’ve come to the tallest stitch I am covering here: the quadruple treble. This stitch is as tall as a whopping six chain stitches!

Admittedly, it takes considerably longer to work one of these stitches than it does a treble stitch or anything smaller. However, one row of these goes a really long way(in my size four yarn these stitches are about three inches tall!). These are really great as part of a pattern for strong visual impact.

How to crochet the quadruple treble

To crochet the quadruple treble, we are simply going to do more of what the other tall crochet stitches have called for. First, yarn over five times. Insert your hook wherever this whopper of a stitch is going to go. Draw a loop of yarn through and yarn over again.

Now take the yarn over that you just did and draw it through the next two loops of yarn on your hook. You are going to do this five more times(six times total), making sure to do a yarn over before each time you draw your yarn through. When you’re done, your hook should only have one loop of yarn on it(and you’ll have a super-tall stitch to show for your efforts).

At this point, we have covered all of the taller crochet stitches in detail. Although we could actually we could make stitches that are even taller, they would be impractical for most uses . Anyways, this has hopefully given you a good working knowledge of these stitches and how they are made.

However, I highly recommend you watch the video for these stitches as well. Even if you are pretty confident in reading my directions, the video is very helpful for practicing these stitches.

Now if you have a project that calls for one of these tall stitches, you’ll know what to do! Who knows, you may even decide to create something entirely unique and unusual working with these. The possibilities are endless.

Before you go, be sure to sign up for emails so you can stay in touch with me and get regular tutorials, crochet helps, and fun new projects. As a bonus, I’ll send you my master list of 101 crochet ideas right away.

…don’t forget to pin this for later so that it stays where you can easily find it!

And finally, if you’d like to connect with other crocheters and to learn and encourage, check out my Facebook group: The Encouraging Crochet Community.

Even though these stitches may not be used a lot, they are eye-catching, fun to do, and really rather impressive!

Get the planning system that I use to keep all of my projects straight (plus a house full of kids):